The Man I Want To Be

My wife and I were having one of our usual evenings. She had finally come home after teaching a lab, and I had finally given up trying to smooth out other authors' clunky prose. In between rolling a ball down the hallway for the dog, half-watching a repeat of Top Chef, and filling each other in about our days, we got into one of those half-serious, half-mocking philosophical discussions. The kind that happen after you've both just put in a 12-hour day, already have one drink in you, but are still too wired to really sit still or shut off your mind.

The new neighbors' two little boys were playing in the courtyard, too, and gazing up every few minutes in hopes that we might bring our dog outside. Their eager little stares were so intense, we could feel them even through the blinds. That was probably what set us off on the topic of role models and heroes, and who we would want our own future children to look up to. Who we looked up to at their age, and who we still look up to now. And that night, I realized that the man I want to be is actually two very different people. 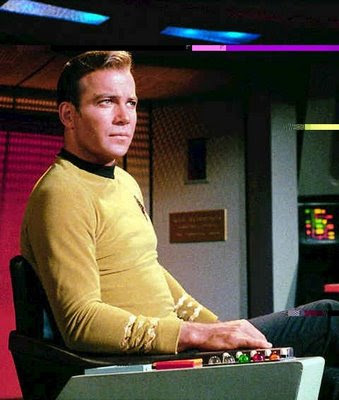 Every man, whether he admits it or not, wants to be Captain James T. Kirk. Even Jean-Luc Picard secretly wants to be Kirk. Because somewhere deep inside, we all want the big chair that everyone else orbits around, and Kirk has it. We want to be able to stand up for what's right, especially if it means defying orders, and Kirk does. And we always, always want to get the girl, and Kirk does—even if sometimes the girl actually turns out to be a salt-sucking monster with matted hair.

Best of all, though, Kirk gets to bark "Explain!" and then someone, either Spock or some soon-to-die red shirt, immediately brings him up to speed on all the latest plot twists. Having this superpower is seriously important to the male psyche, as any man who has ever found himself put in the doghouse by his wife or girlfriend, while having absolutely no idea why, will certainly agree.

Who could be the second person, though? What kind of man could possibly be the yin to Captain Kirk's yang? 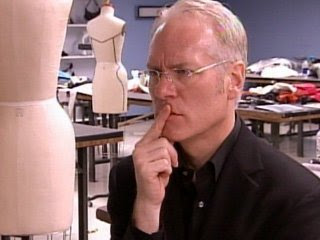 That's right, Tim Gunn, of Parsons The New School for Design, host of Tim Gunn's Guide to Style, and the best thing about Project Runway. Even Jean-Luc Picard secretly wants to be Gunn. He's smart, successful, a high-school championship swimmer, unflappable (except for his hands when he talks), and never, ever has a hair—or, worse, a thread—out of place. Like Kirk, Tim Gunn also makes a difference, even if it is in the life of one style-challenged, on-the-go woman rather than in the lives of six billion sentient beings on a planet about to be destroyed by an unstoppable alien doomsday device.

And just imagine what he could have done with those Original Series uniforms: "I'm not loving these colors. It looks like the NBC peacock exploded, and we all just got one feather. This worries me."

Two very different men. Two very different heroes. But just as Annakin Skywalker was supposed to bring "balance" to The Force, someone has to reconcile these two ends of the Kirk/Gunn spectrum. And only one man has ever managed to do this amazing feat: 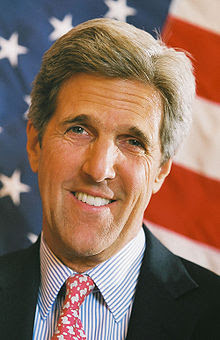 Only one man has ever managed to do this amazing feat: 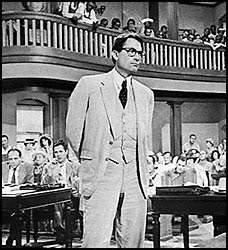 Every even semi-literate person in the English-speaking world has, at least for a moment, wished that Atticus Finch could have been his or her father. And if they haven't, well, they're lying. Or not even semi-literate. Or think that fathers are an inherent evil in the fascist bourgeois power structure. Or something. (In a nutshell, they have issues.)

And every man, whether he admits it or not, dreams of being even half as good a father as Atticus Finch was. I know I do. Especially the closer I get to becoming a father myself.

I could drone on about Atticus, but you either instinctively know what I'm talking about here, or you don't. And if you don't, go rent the film To Kill a Mockingbird with Gregory Peck. Go now. Or better yet, read the book by Harper Lee.

James Kirk, Tim Gunn, meet the man who combines the best of you: Atticus Finch. 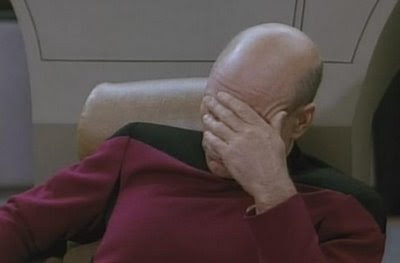 Sorry, Jean-Luc. But as one of our lucky runners-up, we have some lovely parting gifts for you and Senator Kerry...