The Love Line, with Barack 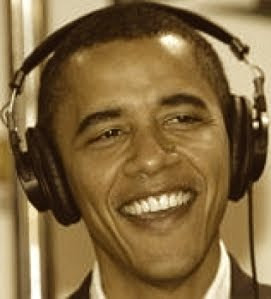 “Thanks for calling, Stephanie. How can I, Barack, transform your life today?”

“I feel you, girl. Interracial marriages are tough, but you know what, Stephanie? Love has no color.”

“Then how are you mixed?”

“I feel you, girl. And I can understand how unhelpful to romance that must be for you. After all, when a fine, caring woman such as yourself, a woman who obviously sees how easily she can help redistribute the love in this great land but is saddled with some teabagging husband who can’t let go of the failed policies of relationships past—”

“No, you’ve got it all wrong, Barack. My husband is the progressive.”

“I beg your pardon?”

“You amuse me, Stephanie.”

“Oh, I see what’s going on, Stephanie. Here you are, married to this fine, evolved specimen of a progressive man. A man who is tolerant enough to open his heart to your misspelled signs and expand your rule-bound horizons with his inclusive—”

“Rule-bound horizons? Are you serious? All this man has are rules, Barack!”

“I can’t call anything by it’s real name, because someone might get offended! And I can’t hold a different view on how we divide the household chores, because then he calls me a sell-out!”

“Sure, he was all cool and charming and elegant back when we were dating, but now? Let me tell you, Barack, living with this man is a whole different thing than dating him! Once he got in that home office in our little white house, he turned into that guy all my friends warned me that he really was! But did I listen? No! I didn’t! And when I tell my husband I want the guy I dated back, he calls me a bitter clinger!”

“Well, nobody likes a clingy woman, Stephanie. Especially some clingy teabagging conservative wo—”

“Hey, I am here at this studio, day in and day out, cleaning up this mess of broken romances that I inherited from the last guy who had this time slot! And I’m happy to do it, Stephanie, because this is The Love Line, with Barack! But I don’t want you folks who created the mess in your relationships to do a lot of talking! I want you to get out of the way so your husband and I can clean up the mess you made! I don't mind cleaning up after you, Stephanie, but just don't do a lot of talking! Now get off my phone and have your husband call me!”

“Let’s go to our next caller on line two. Michael, you’re on The Love Line, with Barack.”

“Doctor Crane? Are you listening?” 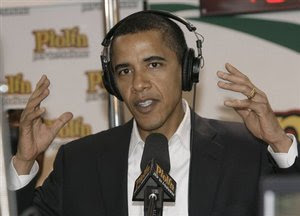 “Sorry about that. Someone obviously didn’t vet the intern who is currently vetting our callers. Let’s try line three. Natalie, you’re on The Love Line, with Barack.”

“Hi, Barack. I have a big problem with my husband.”

“I feel you, girl. Does he not support your rights as a woman?”

“I heard that. Does he not want you to work outside the home?”

“Oh, we live in California, Barack. Both of us have to work to cover all our federal, state, and local taxes. And those state taxes, let me tell you—”

“I think we’re getting off-topic here, Natalie. Now, money is always a problem in any relationship. My own lovely lady Michelle and I made something like $5.5 million last year, and we still argue about—“

“No, you don’t understand. The problem is that he keeps spending money we don’t have.”

“Ah! An investor in your family's future!”

“He keeps saying how if we buy 10 big-screen plasma TVs, he can get a better per-unit price and bring the cost curve down.”

“But we don’t need 10 big-screen plasma TVs. And even if each one costs less, we still end up spending even more money than if we’d just bought one.”

“Well, math is hard, Natalie. And your husband sounds like a strong agent of relationship change. I think you should trust him.”

“Has he promised to get his spending under control, Natalie?”

“He says we’ll have a household budget freeze next year.”

“So what’s your damn problem, girl?!”

“He's freezing our budget at 10 big-screen plasma TVs a year, Barack! We can't afford that! And by then we’ll already be so far in debt that—”

“Looks like Natalie just drove into a tunnel or something! Line four! Bibi, you’re on The Love Line, with Barack!”

“Uh, yes. Hello, Barack. I have this friend, see, and we used to be really close. I mean, really close. He was the kind of friend who would stand by me through thick and thin at all the homeowners’ association meetings, and let me tell you, in my neighborhood, those could get pretty rough."

"He was. But now he’s got these new friends, see? They’re always setting off rockets in their backyards, and I guess he thinks that makes them really cool or something, because he doesn’t have any rockets of his own any more, so—”

“Whoa, Bibi! That’s all we have time for today! Tune again tomorrow for The Love Line, with Barack!”