In these days of sometimes overheated political rhetoric, thin-skinned legislators, and seemingly ever-wussier professional political activists, scary politics is often in the eye of the beholder. All of the following have been accused of being scary, or even violent, political speech or imagery. Which of the following actually scares you with its, well, scary violent-ness?

A) Graphic from Sarah Palin's Facebook page "targeting" House Democrats who voted yes on the health care bill and represent conservative-leaning districts carried by McCain/Palin in 2008: 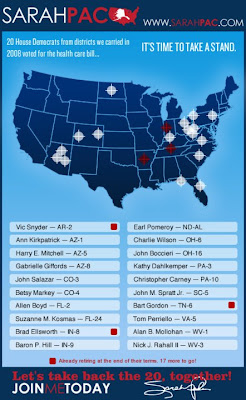 Hint: Come on! If Sarah Palin really wanted to target Democratic Congressmen for assassination rather than electoral defeat, I have no doubt she would go the Malcolm Reynolds route: "If I ever kill you, you’ll be awake, you’ll be facing me, and you’ll be armed, you betcha!” And you've obviously never once in your life regretted clicking the Send button if you don't believe that everyone, even a teacher's union president, deserves one pass for one bad joke. And stern Nancy Pelosi in the flames? Honestly, I look at that, and I don't see "Burn, Witch!" All I can think of is "Hallowed are the Ori." Now, I'm also old enough that a bunch of young men in camo pants stomping around in unison and chanting about the benefits from even more government intrusion into one-sixth of the U.S. economy does, in fact, make me a bit nervous. But I also have to wonder how many of these boys are just plain great kids who got put up to this by the adults around them, kind of like these children. And not to be mean, but some of those Obama Youth Brigade members would probably be so winded by the time they finished climbing all those stairs up to my apartment door, I doubt they would be all that scary anymore. I'd have to fight the urge to invite them in for some rest and a nice lemonade.

Besides, it's a trick question. Because nothing in politics, at least in the eye of this beholder, is scarier than MSNBC's Ed "Psycho Talk" Schultz...