Step 1: Slice open thumb while trying to open soup without spraying it all over the kitchen cabinets.

Step 2: Spray soup all over the kitchen cabinets.

Step 5: Realize you bought the wrong soup, so lunch was doomed from the start.

Do Not Fold, Spindle, Mangle, Mutilate, PhotoShop, or Otherwise Alter This Image

The White House has released the following photo as evidence that President Obama really, truly does enjoy skeet shooting "all the time," even though he never once mentioned it during his entire first term in office (not even when Jared Loughner shot all those people in Arizona, including Congresswoman Gabrielle Giffords, and the gun issue was front and center) or during the 2008 campaign (not even to dig out from under that "bitter clingers" remark): 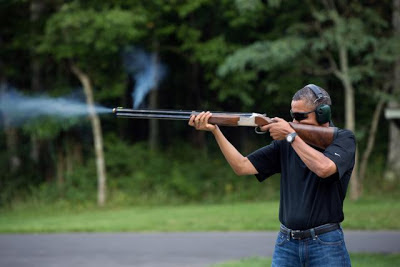 Many things amuse me about this picture. First, the President tucks. My own wife has fought long and hard to rid me of this particular fashion faux pas, to where a shirt only makes it underneath my belt these days if I'm wearing a suit coat over it. Michelle needs to get on this with the President right away.

Third, you have to love the warning that accompanies the photo:

This official White House photograph is being made available only for publication by news organizations and/or for personal use printing by the subject(s) of the photograph. The photograph may not be manipulated in any way and may not be used in commercial or political materials, advertisements, emails, products, promotions that in any way suggests approval or endorsement of the President, the First Family, or the White House.

I doubt anyone will think the President, the First Family, or the White House approves of this blog post or endorses this blog, so I think I'm covered. And the Interwebs, of course, are too scared to even consider manipulating this image in any way.

Finally, I've never gone skeet shooting in my life, but I honestly don't recall ever seeing any skeet shooter firing off his or her gun parallel to the ground, like the President is doing here. Of course, the caption accompany the photo actually says "clay targets." Not that I'm suggesting the President doesn't actually go skeet shooting all the time and this was just the best picture the White House could dig up in an attempt to verify his claim, like all those conspiracy-mongering "skeeters" apparently think. I'm sure the President really does go skeet shooting all the time. They just don't fling the clay targets into the air for him, because he's still just really, really bad at it.

Kind of like he is at being president. Still.

The Blanket Defense, with Chuck Hagel 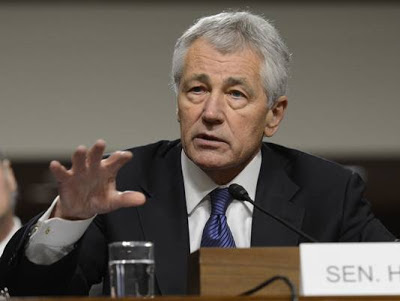