"Hank and Marie Watch Miley Cyrus at the VMAs"

Sometimes, being a Breaking Bad fan is just too much fun...

Many thanks to the Sunday Morning Book Thread over at Ace of Spades HQ for featuring not only I Would Like My Bailout in Bacon but also Let No False Angels. I can now say I've finally had a Neo experience of randomly checking my book sales, feeling my jaw drop, and then going "Whoa..."

Especially given that I Would Like My Bailout in Bacon cracked the Amazon Top 10 in political humor for the first time last night:

I'm liking this indie publishing thing. Oh, yes, I am.

Labels: I Would Like My Bailout in Bacon, indie publishing, Let No False Angels, writing

Dear Angry Young Man who just came to my door and tried to sell me a newspaper subscription to fund your supposed college education...

Rapidly and loudly talking over me when I try to ask you a question is not a good start.

Getting sullen and insulting when I politely turn down your offer is not going to convince me to change my mind.

Having one of your friends lurking noisily but just out of sight beside the apartment door is also not going to convince me to change my mind. Or intimidate me.

And no, you don't get to pet my dog after calling me a name.

Good luck with my neighbors, though. You're definitely going to need it.

Why I Hated Tuesday

No day starts well when you wake up before the alarm all sweating and tense from a stress dream. Especially one where I was the mayor of major American city that apparently only employed obnoxious, out-of-control children. And I mean literal children, no more than seven or eight years old. So I did what any good mayor would do. I fired them all, only to be crucified in the media and by the public for being mean to little children.

At least it wasn't the recurring dream where I had to repeat high school but didn't know my schedule or my locker or my home room. Or the nightmare from last week that was running on Windows 8. My subconscious has some truly scary app tiles on its Start Screen, let me tell you.

No day restarts well when you get back to sleep, then wake up, again before the alarm, to the sound of the dog preparing to hurl a piece of chewtoy she apparently ate the day before onto the carpet beside your bed. It was a deep, awful, horking sound, but at least I got her to the bathroom tile before anything emerged, though she did lick my face in loving doggy gratitude immediately after, before I could stop her.

No day ends well when you spill water on your keyboard, then five minutes later spill coffee on that same keyboard. No tab, no letter c, and no Enter after that, even when everything had dried out. Goodbye, wireless keyboard I had only started using the week before.

So I really hated yesterday, even if I did get some good writing done. And if today isn't an improvement, I will publicly embarrass it on the Internet as well.

Spotted at a Conversative BBQ 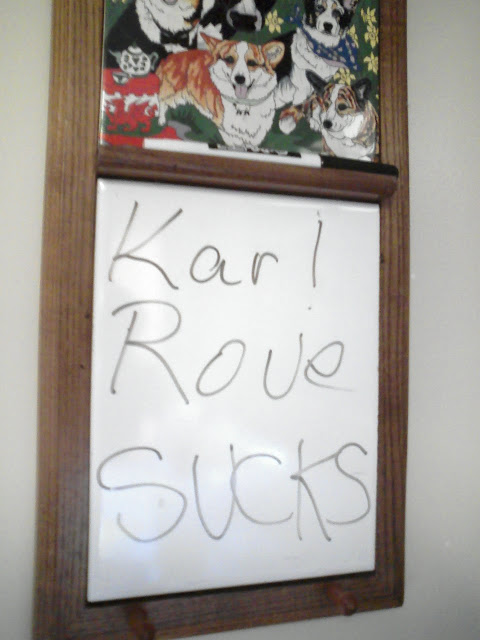